For 11 days in June I joined Mike Cooke on an epic 5500 mile road-trip from England to the far north of Norway and back, a fairly arduous journey made even more difficult by the fact that Mike is confined to a wheelchair for most of his waking life. Mike, who has muscular dystrophy, asked me to join him on the trip, not only to document, but to share the driving. I’m writing a couple of magazine articles about the adventure, so what I thought I’d do here, on my blog, is share some of the extracts from my daily diary/notebook…so, just inane ramblings about nothing in particular really! 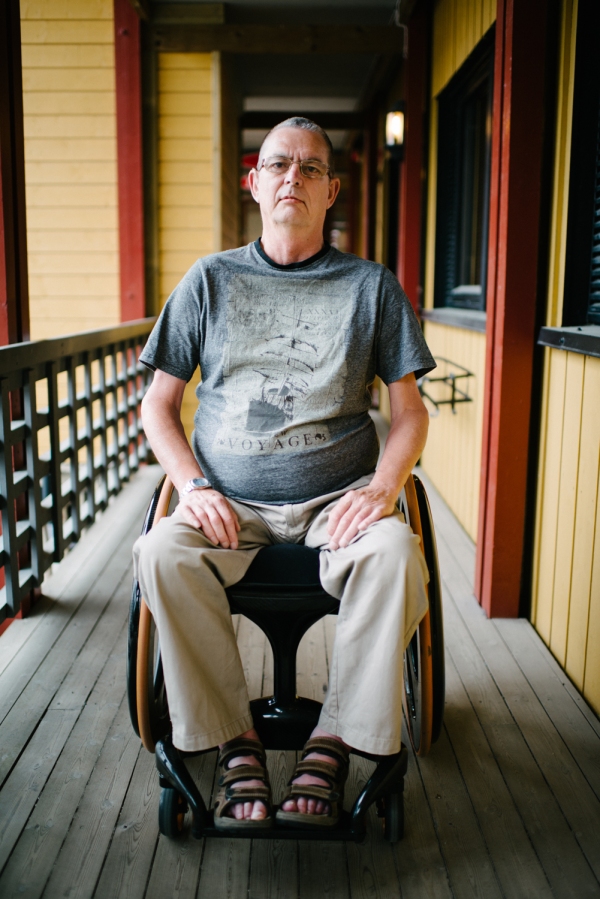 Sunday 15th June. 12.30am – ‘Arrive in Trondheim, Norway. We have driven from Leicester, England, virtually none-stop. I started my journey on the Isle of Man at 5am on Friday 13th, we are both totally exhausted. Because Mikes car has been wheelchair adapted, the fuel tank only holds about 30 litres of diesel, we have to stop every 150 – 200 miles to refuel. Whether I’m driving or not, I have to get out and fill the tank at each stop, consequently, I can only manage an hours sleep at a time. By Trondheim, I’m broken. The first leg takes us through the Channel Tunnel, up across France, Belgium, Holland, Germany and then the entire length of Denmark to Hirtshals, where we catch the ferry to Norway. We both decided, from the start, when planning the trip, that we weren’t going to drink alcohol, mainly due to the amount of driving, but also down to the hideous price of booze in Scandinavia. In ‘The Last Stop Shop’ in Hirtshals I see shelves of cheap wine and beer and begin to regret our joint decision. I buy a pack of Marlboro Lights and a Mars Bar instead. I get into bed into bed at 1.30am, it’s daylight. I realise that all I’ve eaten in two days is 4 cold sausages, 2 muesli bars and a bag of mixed fruit and nut. Liquid intake has been 6 cans of Red Bull, 6 coffees and a litre of water. Not good.’ 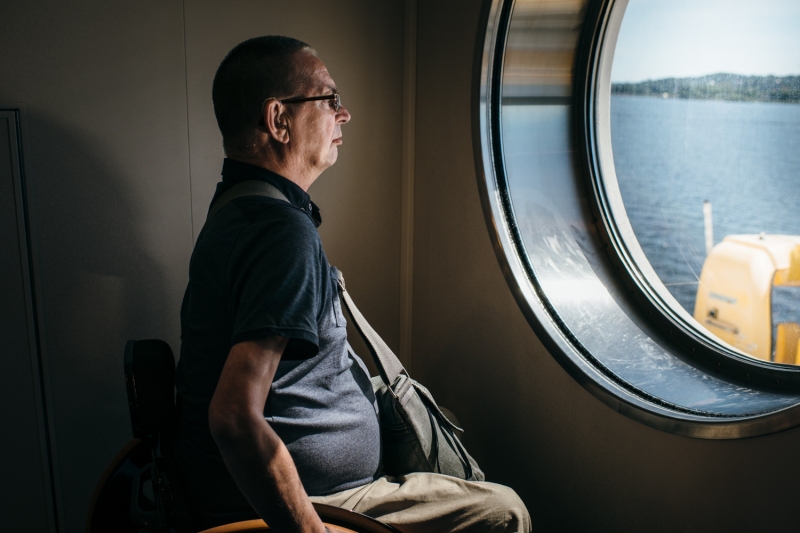 Wednesday 18th June – ‘We arrive in Tromsø after a relatively short 200 mile drive from Fauske, a drive which takes us through the stark, industrial town of Narvik. Narvik is exactly half way, so we stop to switch drivers and have a coffee. While Mike is finishing his coffee I go outside to get a camera from the car, when I close the sliding side door it jams – this is a pain in the ass because we will now have to open the slow, hydraulic back door every time I need to get Mikes wheelchair out. Our hotel looks like a police station, or a young offenders prison, but it’s clean and it’s comfortable. The breakfast is the usual Norwegian thing – pickled fish, dried meat, rye bread and other assorted savouries, not to everyone’s taste, but I love it!’

‘We get a bus into town, the lady at reception has recommended a couple of bars, when we arrive one of the bars is closed, which is a good job, because the only access is up a flight of steep wooden stairs. We arrive at the second bar, we’ve been told it has wheelchair access, this is only half true. The ramp outside the bar resembles the North Face of The Eiger, Mike attempts to scale it by reversing, but concedes and I push him. We drink some very expensive beer (breaking our rule, but the only time on the trip) and then get the bus back to The Sidspissen Hotel. Mike has been phoning hotels further north to book rooms, it’s important that the rooms are ‘wheelchair friendly’. I have come to realise that even when a hotel says it has disabled facilities, it rarely has – most doors have 5cm lips at the bottom, I assume it’s something to do with fire regulations, not something you ever notice when you’re walking, but quite a difficult obstacle to negotiate from a wheelchair’ 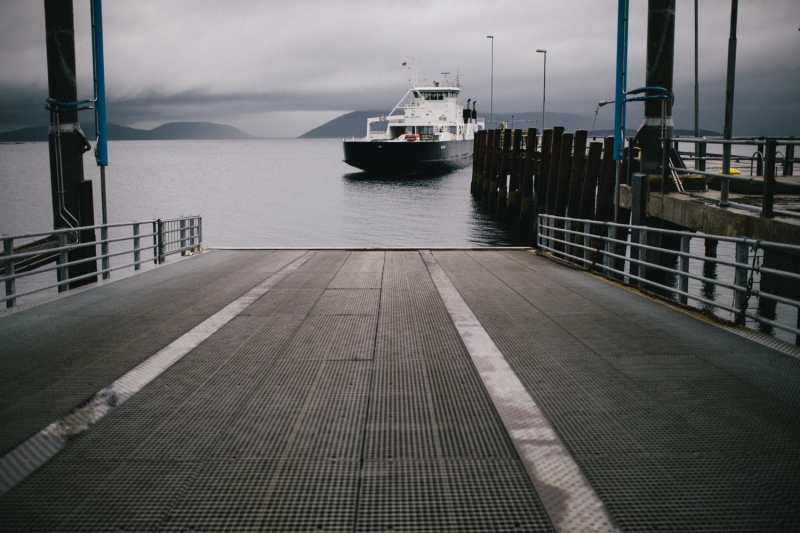 Thursday 19th June – ‘We catch two ferries today to get us back onto the E6, the main road that runs the entire length of Norway, the drive between boat rides takes us through some of the most breathtaking scenery I’ve ever witnessed. Like most of the ferries we’ve caught, neither of today’s ferries has adequate wheelchair access, so Mike has to sit in the car, which upsets me a bit. I go up on deck and take photos of the panoramic view and then go back and show Mike, but it’s not the same, Mikes only view is the back of a Shell fuel tanker.’

Friday 20th June – ‘Nordkapp is a massive disappointment and anti-climax. There is a £14 entry fee, which irritates the shit out of me. For the last 100 miles of the drive to Nordkapp we hardly saw another vehicle on the road, so I’m utterly amazed/shocked when I see the car park is filled with camper vans, all of them facing north so that the occupants don’t even have to go outside to watch the Midnight Sun…not that anyone got to see it anyway, it’s minus 2 degrees and snowing. There’s also hundreds of people, coached in off the cruise liners that stop in the small town of Honningsvåg. The disabled facilities in the visitors centre are dismal – all the outside area is loosely gravelled, making it extremely difficult to ride across. Mike attempts to cross from the building to the Midnight Sun sculpture, but it’s virtually impossible, the closest Mike gets is taking photos from behind the windows. All the doorways have lips, the cafe has raised seating areas and the only disabled toilet is out of service. While we’re waiting for the next cinema screening we go to the light display in the base of the building, it’s at the bottom of a fairly steep, 100 metre long wooden ramp, Mike gets down it without any problems, obviously…but there is no lifts to get him back up. I offer to push Mike back up, but as expected, he declines. I bet him £20 that he won’t manage it, but immediately retract the wager as I suddenly remember how stubborn Mike is’

If you ever want to witness shear determination, watch a man ascend a 300 foot long slope in a wheelchair, backwards, using only his arms and what little strength he has left in his legs. 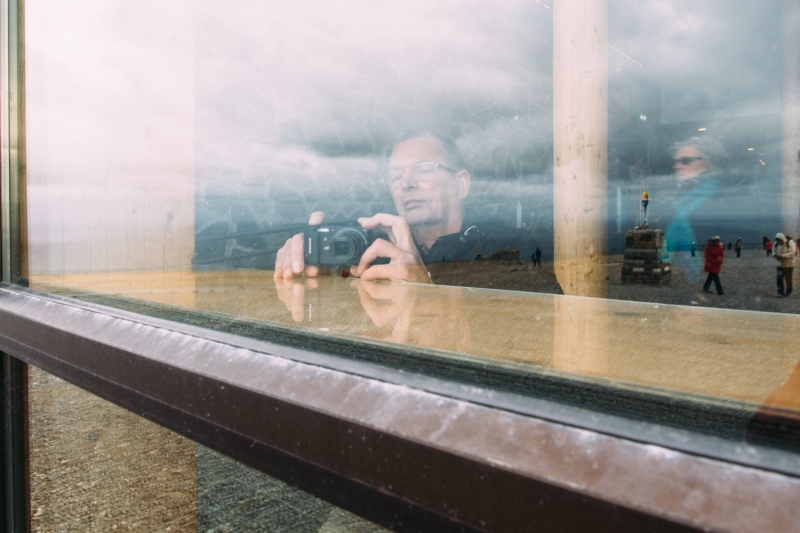 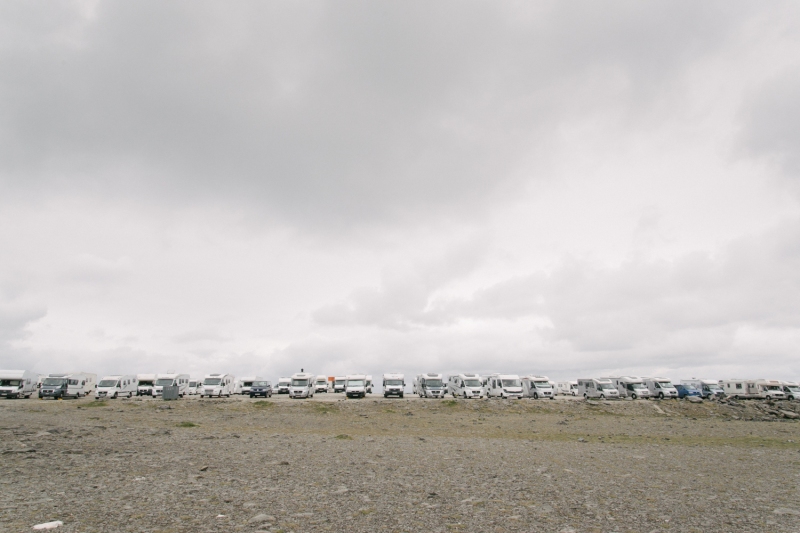 ‘Reindeer aren’t like sheep – when you encounter sheep in the middle of the road you slow down a bit, but carry on driving and they move out of the way. Try that with a reindeer and you’ll end-up with 100kg of twitching Rudolph through your windscreen and in your lap. Reindeer don’t move out of the way’

Sunday 22nd June – ‘I haven’t eaten a proper meal in over a week. I think I’m getting scurvy’